We completed the aerial waterfowl inventory of both rivers on Wednesday, October 28th. It seems like it has been a while since the weather has cooperated with us. I need to send out a Big Thanks again this week to Josh Osborn for taking my seat in the airplane. Today is my last day in Covid-19 quarantine, so hopefully, I will be back in the air next week. Josh estimated over 271,000 ducks in the Illinois River Valley (IRV). This estimate is about 3% below the 10-yr average, but up 32% from last week. We lost some of the early season migrants, like northern pintail and northern shoveler, but picked up some mallards, which were 26% above average and nearly double what we had last week in the IRV. The central Mississippi River Valley (CMRV) had over 252,000 ducks about 35% above average for the last week of October. It was hard to make comparisons between weeks because we missed the lower portion of the CMRV due to low clouds last week. However, I think we had a push of new birds into the central Mississippi River because a few diving ducks trickled in on Pool 19 and Port Louisa and Henderson Creek duck numbers jumped substantially. I have heard many reports of quality duck hunting over the past week, including Granite City, Nutwood, Pleasant Hill, Beardstown, Havana, Manito, Chillicothe, and Hennepin. Let’s hope the trend continues!

I decided to post some graphs representing the weekly averages (2010–2019) of duck species along the two rivers. The averages are one way to gauge how the migration is progressing each week. By looking at the graphs, one can see how migration chronology varies by species. Several species, like pintail and gadwall, have reached their peak numbers in central Illinois by early November; however, the coveted mallards and canvasbacks peak much later and maintain those numbers for multiple weeks during fall. If you are chasing pintails, you better get after them because by Thanksgiving many will be gone. 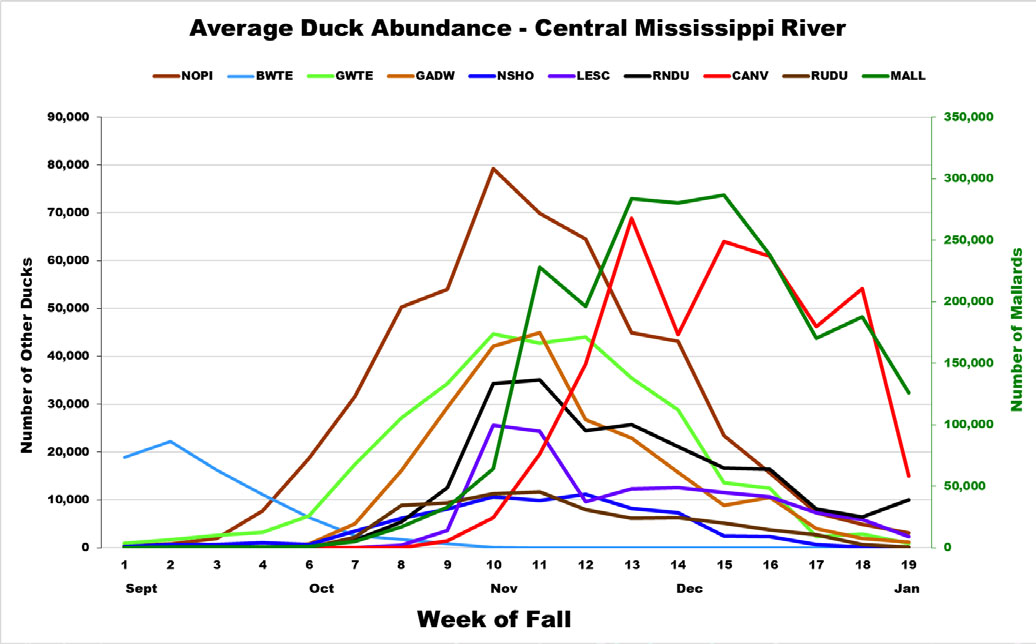