We resumed our flights of the Illinois and Mississippi rivers this week just prior to the onset of the North Zone Waterfowl Season opener in Illinois. Flooding still persisted along the Illinois River, and recently the central Mississippi River lost some important waterfowl habitat due to extensive flooding from the Quad Cities to Grafton. Port Louisa lost most of its duck food and Keithsburg, Henderson Creek, and Batchtown refuges were hit pretty hard by the flooding as well. Swan Lake, however, at the confluence of the Illinois and Mississippi looks phenomenal, and duck abundance was great there as I estimated 56,220 ducks on October 10th. Duck abundance (68,125) along the Mississippi River was over 10 times greater than the 10-yr average with the majority of these ducks at Swan Lake. Duck abundance along the Illinois River is climbing, and I estimated 51,335 ducks along the Illinois River this week; however, this estimate was 25% below average for the second week of October. Good Luck hunting this weekend during the North Zone opener and Central Zone Youth Hunt!

This week my topic is American green-winged teal. Green-wings are named for their green iridescent speculums that resemble the much larger northern pintail. Unlike their slightly larger cousins, the blue-wings that reach peak fall numbers in Illinois during mid-September, greenwings won’t peak until the first week of November, and many stopover until late December before heading south to their wintering grounds. 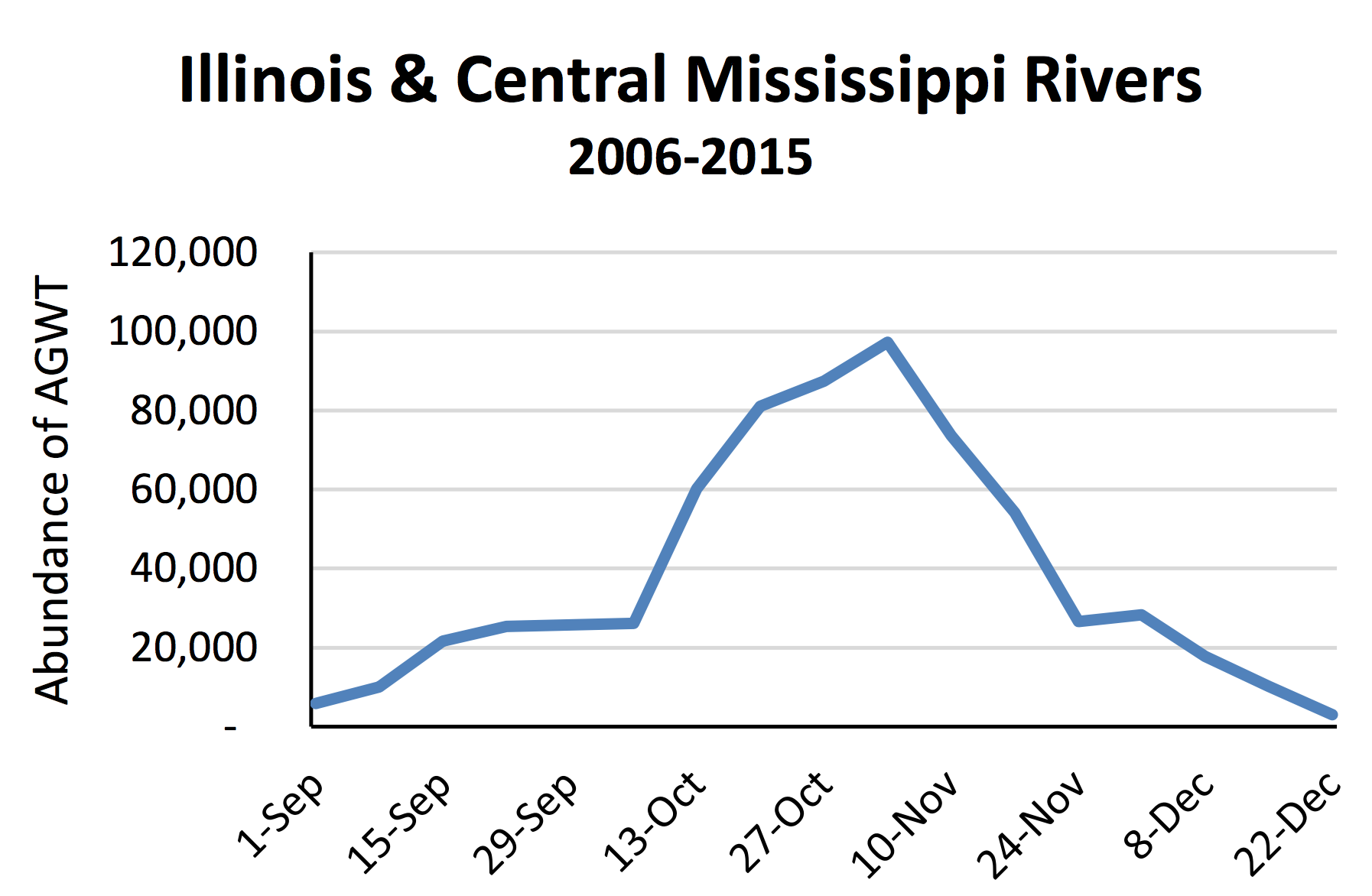 Green-wings are the smallest of our North American ducks, weighing about 325 grams (3/4 lb). Their breeding range occurs across Canada and the northwestern United States; however, their primary breeding areas occur in the boreal forest and deciduous parklands all the way up to northern Canada and northwestern Alaska. They winter across the United States and south all the way into Mexico. Core wintering areas include coastal Louisiana and Texas, the Playa Lakes Region of Texas, California’s Central Valley, the lower Mississippi Alluvial Valley, and Mexico. Due to their small size and bill structure, they forage on mudflats and very shallow water and in agricultural fields. A study from Illinois during falls 1978-1982 found a plant seed diet (97%) dominated by sedges. We evaluated foods habits of green-wings during spring 2016 along the Illinois River and identified diets consisting of 75% plant materials and 25% invertebrates. Smartweeds were the number one food item; sedges, aquatic worms, rice cutgrass, and pigweed rounded out the top five foods. Interestingly, fingernail clams were the 7th ranked food item despite their low availability on the landscape. In early October, many male green-wings will still have their drab, brown, summer plumage. Yet by mid-November, most males will have molted into their breeding plumage sporting their reddish heads and green eye stripes. Greenwings generally rank in the top five species in Illinois’ waterfowl harvest and were the second most harvested duck in Illinois during fall 2014.